Showing posts from October, 2015
Show All

- October 30, 2015
Annie Birmingham Hippodrome 30th October 2015 Whether you have either seen the 1982 or most recent 2014 film of the childhood classic Annie, you can't help but admit that it is one of the most uplifting stories of a young redhead orphan who goes on the search for her parents after Billionaire Oliver Warbucks helps her after Annie spends a Christmas placement with him to which he falls for Annie's charm and promises her that her parents would be found, so you'll be happy to know that I believe the stage adaption does the film massive respect in becoming one of the most uplifting productions I have seen in recent times. Isabella Pappas took to the stage and shone as little Annie, who's clear crisp voice and powerful lungs gave won over the whole auditorium, and it doesn't even stop there as the other young female orphans gave equally as much passion and energy to their performances, giving these characters a chance to stand out in their own right. Now
Post a comment
Read more

- October 29, 2015
Brave New World Everyman Theatre, Cheltenham October 24th 2015 There are few plays these days that capture me through synopsis and background of the production, and even though Brave New World did exactly this, it wasn’t what made me want to come and see this play, but instead it was a curiosity to see how Aldous Huxley, the author of the book to which this adaptation is taken from, visioned the future when the book was originally written in 1931, before being published in 1932, and how similar it is to our present day now, and in all honesty, even though not entirely correct, though I really hope it would be in the future, it is still spookily accurate to how we treat different types of humanity these days. So let’s talk about the production, which ultimately at the beginning feels like an experience, as you as the audience are viewed as staff trainees for the Central London Hatching and Conditioning Centre, where we are cleverly led through the centre to the different de
Post a comment
Read more 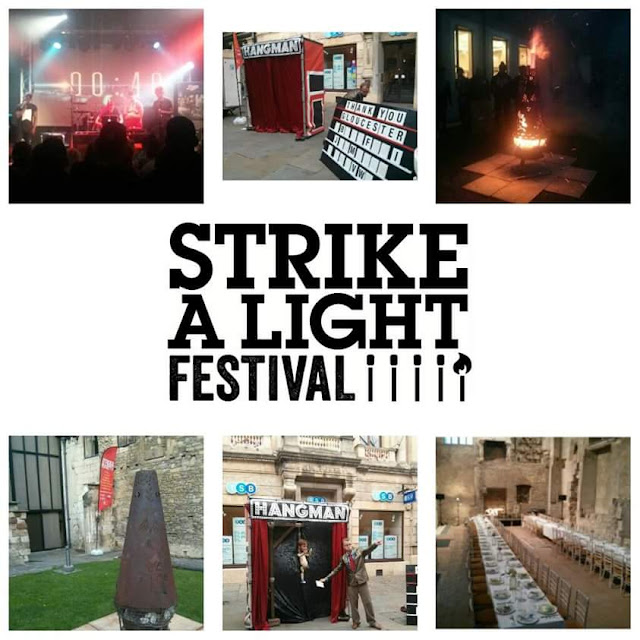 Its Wednesday 7th October and Strike A Light is back in Gloucester for its second outing of the year, and its launch night at Blackfriars Gloucester, with a whole host of local artists showcasing the incredible talent that those from across the county have, performing to a pack house of those within the industry and those passionate about Theatre enjoying drinks and pizza. As a volunteer for the festival, I arrived at 4:30pm to find the setup, which consisted of two long large tables, so my first task was to make gin and tonics which would be served to guests upon arrival. After a few more small jobs, me and Jake positioned ourselves by the gates to welcome guests through Blackfriars, but soon heading in to watch the evenings entertainment, but not before we spoke to the guests and hearing lovely comments about the festival's programme and hearing so many people excited for some of the performances. The evening was a resounding success and all those who attended seemed to have a
Post a comment
Read more

- October 21, 2015
Dead Dog In A Suitcase Everyman Theatre, Cheltenham 17th October 2015 In my lifetime I've watched two Kneehigh productions, The Wild Bride and Rebecca, were those alone made me just fall in love with the company, as their storytelling to these adaptations were beautifully portrayed on stage and they really gripped me when on viewing, but on first glance, for once I was not sure how I was going to view Dead Dog In A Suitcase, as I felt like the knowing that it was based on the Beggar's Opera threw me as I am not a big fan of opera, but I knew I shouldn't of been worried, because after watching this adaptation from Kneehigh, I can definitely say that they did not disappoint, and that this production out of all those that they have produced is the one that I would thoroughly watch over and over! There are so many places to start with this spectacular, but unusual I'll start with the end, which was possibly also the highlight of the production, because never ha
Post a comment
Read more

- October 17, 2015
NT Live: Hamlet Odeon Cinema, Coventry 15th October 2015 Though as a Theatre student I have read many productions, these including the works of Shakespeare, I have never had the chance to either read or watch Hamlet, thought to be Shakespeare's most performed production out of them all, so when National Theatre Live announced that they would be screening the renowned production starring Star Trek and Sherlock star Benedict Cumberbatch, I jumped at the chance to experience this spectacular for the first time. Straight off I should say I loved this production because it was just visually stunning and every single cast member showed such incredible passion towards their characters, and even though critics were not so favourable to Benedict portraying the title role as Hamlet, I thoroughly enjoyed his performance, even when I am not mad about himself as an actor in general. Sîan Brooke should also get an honourable mention for her portrayal of Ophelia, Hamlet's love in
Post a comment
Read more

- October 16, 2015
Hecuba The Swan Theatre, Stratford Upon Avon Tuesday 13th October 2015 Considering I have been to Stratford many times to see productions, though not at the RSC, and even had a backstage tour of the RSC during my college degree, I've never actually seen a production take place on the Swan Theatre stage, so it's really brilliant to say that my first experience fulfilling this was a fantastic introduction to the sort of productions that take place in the building, because Hecuba was incredibly gripping and intense from start to finish, constantly drawing myself and the whole auditorium in so much that you could almost hear a pin drop if possible! Derbhle Crotty started proceedings with a powerful start as she drew the audience in as the title character Hecuba, and never lost momentum throughout her whole performance. She was utterly transfixing and the way she spoke the words of the play was fluid and completely mesmerising. Her dynamic with Ray Fearon's 'Aga
Post a comment
Read more

- October 07, 2015
Pomona The National Theatre, London October 2nd 2015 Set in a real part of Manchester, where a tram line runs through and is only minutes from foot, one of the national theatre's latest production, Pomona, is a fast paced, gritty and supernatural feel that grips you completely throughout and never lets go. Based in the temporary theatre, The Shed, the production was set in the round, and its main thread surrounds Ollie, a girl who has lost her sister, and hears about the spooky goings on in Pomona, so goes to investigate in the search for her sibling. Right at this point I should say that it's been awhile since I've seen a production with such a strong cast with incredible talents. Sam Swann and Sarah Middleton are especially jaw dropping in their roles of Charlie and Keaton, whilst Sean Rigby and Rebecca Humphries are exceptional in their roles of Moe and Fay. What's also incredible about this production is the current costume and prosthetics, main
Post a comment
Read more

THEATRE REVIEW: The Importance of Being Ernest ★★

- October 07, 2015
The Importance of Being Ernest The Belgrade Theatre, Coventry 29th September 2015 Oscar Wilde's The Importance of Being Ernest has always been seen as such a national treasure in the world of Theatre, with even 2 productions of the play happening within the city within the past few weeks, but this version was one that was transferred from the west end, starring Nigel Havers, Martin Jarvis, and Sian Phillips, among many others that make up this splendid, hilarious production. You get the sense of something wonderful about to happen on stage as soon as you walk into the auditorium though, before the action starts, as you witness an extravagant and creative set, really looking like the inside of a estate house. It really is a delight, and was still stunning to look at when I became disconnected from the play, so a big mention should go to the set designer for designing such a glorious set! Set in 1895, this version was a tiny bit different, as in fact it was set in the
Post a comment
Read more

- October 01, 2015
An Inspector Calls Everyman Theatre, Cheltenham October 1st 2015 When I was in my later years of education at school, I was studying literature in the forms of Malorie Blackman's 'Noughts and Crosses' as well as Harper Lee's 'To Kill a Mockingbird', but always knew of another book being studied, this resulting to being 'An Inspector Calls'. I knew very little about the story previously coming into watching this production, and I think this was a huge benefit as even though I found this version of a classic very draining, I couldn't help but be gripped right the way throughout! I had heard from many sources who had seen this production in previous years that one of the main attractions to this performance was the actual set, which has a constructed building right on stage, and they were not lying! The first reveal of the set is set to music that I almost felt resonated a Phantom of the Opera feel with the bold music score as the curtains
Post a comment
Read more
More posts